A FEW WORDS ABOUT US

Walter Piccone launched OMEROS® in August 2004 with the sole purpose of delivering the highest level of products and services to clients who demand the very best.

Wally, who comes from a family of tailors, has over four decades of experience in fine men’s clothing. With his extensive knowledge of and relationships with, American & Italian designers and manufacturers, he is able to advise you in what will make you look, feel and perform at your very best in today’s highly competitive business world.

“After learning the trade of my grandfather, Giovanni, and earning his diploma in Rome, my father, Omero, mother, Adelma, and my 5 older brothers left Italy to find a new life in the United States in 1954. With the help of his cousin, my father landed here in Rochester to search for a place to apply his skill. He found the Hickey Freeman Co. As fate would have it, he was hired as a tailor.

In 1974, my big brother, Angelo was hired by Hickey Freeman as a salesman, and a couple of years later persuaded me to join him. I was fortunate enough to be hired, and during my 12 years there, I learned clothing fitting, construction, and execution – It was great! But I knew I could do better.

Shortly after, I went to work in a local custom tailor shop, where under the tutelage of my boss, Pete, I learned to sell clothes. This was in 1988 and for the next 4 years, I studied diligently and applied what I was learning every day, in an effort to become the best. Again, I got restless and started looking for larger opportunities.

I then took a position with a luxury, Italian clothing retailer and began the final leg of my journey to what would ultimately result in the dawning of OMEROS®. Here I learned a lot about the attitude that came with fine Italian clothing.  I learned that a wardrobe is so much more than just clothing; it’s an image, it’s a representation of you… it’s a tool that can be leveraged every day.  The year was 1990, but by 2000 I couldn’t help but feel that there was still more out there for me.

My son, Matthew, was in college and working in a designer clothing store in 2003. Matt had always shown interest in continuing the legacy of the Piccone name as a tailor and custom clothier, but it wasn’t until now that it seemed like a real possibility.  When he came to me with the thought of working alongside me, I knew it was time to make a move: Then and there I knew I had to go into business for my clients and myself.

In 2004, with Matt on the verge of graduating college and already building a client list of his own in Buffalo, OMEROS® was born.  The goal of taking clients to unprecedented levels, where no clothing retailer has gone before was at last realized.”

In April 2016 Matthew was named President and Chief operating officer of OMEROS® Custom, Ltd. He has assumed the day-to-day operations effective immediately. “His clients actually promoted Matt”, boasts his proud father Walter who will continue servicing his clientele and acting as Chairman. “His passion, determination on meeting and exceeding all of their expectations, and his uncompromising integrity is what separates Matt from the “Chaff”. His repeat clientele are happy to have him taking care of their image needs or they would go elsewhere.”

OMEROS® Customs, LTD. takes great pride in being a part of the Western New York community and takes every opportunity to show that appreciation by giving back. Over the years they have had the honor of being involved with many great charitable organizations, including:

Custom suits can not only provide an impeccable fit, but also define your style. OMEROS® custom suits are individually constructed for a truly unique and custom fit.

Custom shirts allow you to not only change up your look in your suit, but also customize your casual look when worn casually. Define your style with traditional white shirt or a bolder pattern.
View More 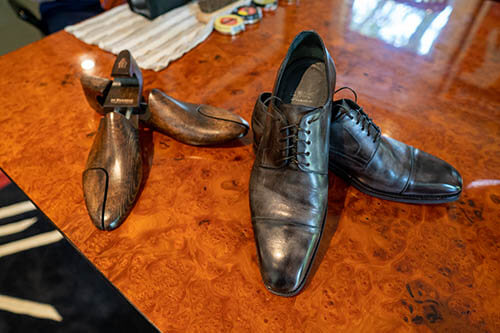 A LIMOSUINE FOR YOUR FEET

Choose custom hand-made shoes to complement your suit. With many styles, materials, finishes and closures available, your shoes will provide a unique style from head to toe.
View More 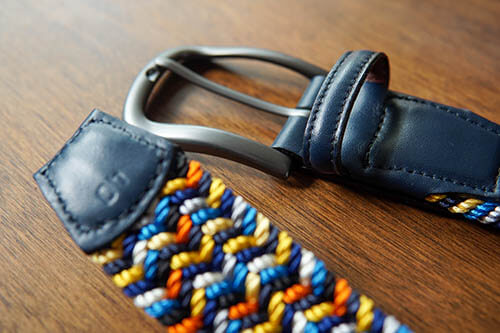 Don’t leave your belt, tie, cuff-links or socks behind. Choose custom accessories to complement your style and finish off your look with the finest attention to detail.
View More

Dear Wally & Matt, Thank you both for your good work on my new clothing. I must admit that I was a little skeptical initially but you’ve shown me that your great products and excellent service are well worth the investment in my image. You’ve exceeded my expectations! Feel free to use my endorsement in your daily active selling. I look forward to working with you both for a long time.

I want to thank you for taking great care of me and my wardrobe for years. You’ve always been there when I needed you, and have consistently exceeded my expectations. I can shop anywhere I want, but I find that your expertise ensure I get the best. Now that your son Matt has joined the family business, I look forward to more years of great clothing and service.

It’s been a pleasure working with you over the past 20 years. The quality and breath of selection of your offerings and your personal knowledge of fabric, construction, and fit have made it easy to buy clothing. Your attention and customer service is the best and you make it fun!

It’s been a pleasure working with you over the past 20 years. The quality and breath of selection of your offerings and your personal knowledge of fabric, construction, and fit have made it easy to buy clothing. Your attention and customer service is the best and you make it fun!
View All Testimonials